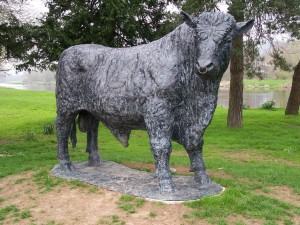 The market town of Builth Wells is a small town with an eclectic mix of shops, pubs, restaurants and places of interest located in the Heart of Powys, Mid-Wales. Few landscapes are as impressive, varied and beautiful as those of Powys. The county features diverse and distinctive landscapes that support a great range of species and habitats, as well as being home to many sites of archaeological and scientific importance. Powys covers a quarter of the landmass of Wales and two of Britain’s most famous rivers, the Wye and the Severn, have their sources within the county. The south of the county lies within the Brecon Beacons National Park, whilst the north-western border abuts the Snowdonia National Park. The majority of the Powys population is made up of villages and small towns. Local areas of interest include:

Most of the Brecon Beacons National Park is bare, grassy moorland grazed by Welsh mountain ponies and Welsh mountain sheep, with scattered forestry plantations, and pasture in the valleys. It is known for its remote reservoirs, waterfalls including the 90 foot (or 27 metre) Henrhyd Waterfall and the falls at Ystradfellte, and its caves, such as Ogof Ffynnon Ddu. Activities in the Park include walking, cycling, mountain biking, horse riding, as well as sailing, windsurfing, canoeing and fishing, rock climbing, hang-gliding, caravanning, camping and caving. A long-distance cycling route, the Taff Trail, passes over the Beacons on its way from Brecon to Cardiff, and in 2005 the first walk to span the entire length of the Brecon Beacons National Park was opened. The 100-mile (160 km) route, called the Beacons Way, runs from the foot of Ysgyryd Fawreast of Abergavenny and ends in the village of Bethlehem in Carmarthenshire. 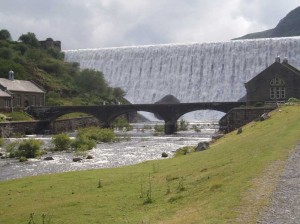 The Elan Valley is a river valley situated to the west of Rhayader, in Powys, Wales, sometimes known as the “Welsh Lake District”. It covers 70 square miles (180 km2) of lake and countryside. The valley contains the Elan Valley Reservoirs and Elan Village, designed by architect Herbert Tudor Buckland as part of the same scheme. Elan Village is the only purpose-built Arts and Crafts “Model Village” in Wales. It is also famous for its picturesque scenery. Over 80% of the valley is designated as Sites of Special Scientific Interest, and a popular cycle trail, the Elan Valley Trail, makes a loop from Rhayader around the reservoirs.